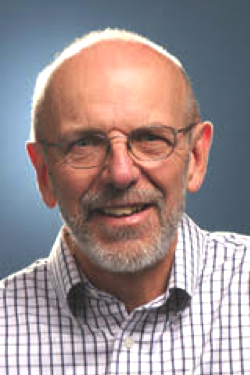 Robert F. Luck, Professor of Entomology, Emeritus, internationally known for his research on biological control of citrus pests and the basic science underpinning biological control, passed away on September 6th 2020. His leadership and pioneering research in citrus pest management were based on an in-depth understanding of the ecology and behavior of pest insects and their natural enemies. He stressed the importance of observing insects in the field and often disappeared from campus exclaiming, "Somebody has to do the field work!" The results from his research enabled him to make informed decisions about optimizing pest management strategies. Consequently, his advice and collaboration were sought constantly by colleagues, students, and agricultural producers eager to apply the principles that he had discovered. Professor Luck had the valuable ability to operate as both a fundamental and practical scientist, delving into the causes as well as consequences of pest outbreaks.

Bob Luck was born in 1941 in Vancouver, Canada. He attended the University of California, Berkeley (UCB), earning a B.S. degree in Forestry in 1964. Under the direction of Professor Don Dahlsten at UCB, he completed a Master's degree in Entomology in 1966. Bob obtained his Ph.D. in Entomology with Professor Dahlsten at UCB, working on various species of scale insects in the pine forests of California's Lake Tahoe area. Shortly after completing his Ph.D. in April 1973, he accepted a position in the Department of Entomology, Division of Biological Control, University of California-Riverside (UCR). There he continued his work on forest pests until the 1980s, when he initiated studies on insect pests of citrus.

During the next decade, Professor Luck conducted detailed laboratory and field studies on various parasitoids that attacked different scale insect species in citrus. This work shed light on the relationship between the size of a parasitoid's host and the sex ratio of the parasitoid's offspring, and between female wasp size and their effectiveness in biological control, along with numerous other host-parasitoid relationships that affected the ability of parasitoid wasps to suppress pest populations. He became an expert in designing experiments to determine optimal parasitoid release rates, and to monitor the impacts of parasitoids and predators. He applied this fundamental knowledge to develop integrated biological control systems for citrus production in California's Central Valley. His novel management methods were used to control a suite of citrus pests with natural enemies.

In 1992, Bob hosted Professor Joop van Lenteren from Wageningen University in the Netherlands for a sabbatical. Joop still remembers how Bob explained to growers in clear and straightforward terms how biocontrol works, and how he spoke very effectively about biocontrol and IPM at grower meetings, emphasizing the negative effects of most insecticides on natural enemies. He initially received a rather lukewarm response, with comments like "biocontrol was kind of a religion and did not really work". At one meeting, a rather aggressive grower strongly advocated the need for extensive use of pesticides, but surprisingly, allowed Bob to conduct a biocontrol and IPM experiment in his fields. The experiment was successful, converting the grower into an enthusiastic user and promoter of IPM practices. When Joop accompanied Bob on a visit to the grower, the convert immediately started telling this supposedly naïve guest from Holland how important Bob's work was for the growers in California and worldwide! Overall, Bob impressed Joop with his careful, friendly, and personal approach to working with growers and extension agents in developing a citrus IPM system that was both ecologically sound and economically feasible.

Professor Luck continued this important work during the 2000s, enhancing the biocontrol system by studying additional pests, such as soft scales, that are common in Central Valley citrus. In appreciation of his contributions, the California Citrus Quality Council presented him with the prestigious Albert G. Salter Memorial Award in recognition of his significant discoveries that benefited California citrus growers and the Citrus Research Board over several decades. For his advances in the basic science of biological control, he was named Distinguished Scientist for the Year in 2003 by the International Organization of Biological Control (IOBC)-Nearctic Regional Section, and elected as an Honorary Member of IOBC Global in 2005.

Professor Luck's pioneering work on the practical use of natural enemies in augmentative biological control led to collaborations with several other scientists who wanted to increase the long-term effectiveness of natural enemies. His colleague William Murdoch of the University of California, Santa Barbara, showed that the coexistence of scale insect populations with their parasitoid complexes was partially driven by the existence of habitat refuges where scales were not attacked by their parasitoids. Allied to his applied research, he conducted fundamental studies on the determination of parasitoid offspring sex ratios, using Aphytis and Trichogramma spp. wasps as models. Several important fundamental discoveries in collaboration with Professor Len Nunney at UCR resulted in extension of the local mate competition theory. Involvement of bacteria in causing parthenogenetic reproduction in parasitoid wasps was elucidated with his Ph.D. student Richard Stouthamer. Elegant field experiments with another graduate student, David Kazmer, demonstrated the importance of size in determining the fitness of male and female wasps in the field.

Professor Luck's talent and leadership in biological control was recognized both in the U.S. and globally. In 1989, he co-organized the "Vedalia Symposium of Biological Control: A Century of Success" at Riverside, California, the "International Entomophagous Insects Workshop" at Lake Arrowhead, California and the "International Symposium on Biological Control Implementation" at McAllen, Texas. He also assisted in establishing the USDA, APHIS National Biological Control Institute in Washington, DC that year, and served on the first User Advisory Panel. He was invited in 1995 to co-chair the biannual meeting of the International Organization for Biological Control Working Group on Quality Control of Mass-Reared Arthropods at Santa Barbara, California. He also traveled widely to expand his research in classical biological control, collecting natural enemies in Pakistan and China, and engaged in highly productive sabbaticals in Australia, and with Professor van Lenteren at the University of Leiden and at Wageningen University in The Netherlands. Professor Luck also maintained long-term collaborations with Professor David Rosen in Israel, Professor Masami Tagaki in Japan, and, at the end of his career, with Dr. Alejandro Tena working to improve biological control of citrus pests in Spain.

Professor Luck was an exceptionally engaged and approachable research program leader, and well known as an enthusiastic educator and mentor of graduate students. During his career, he graduated five M.S. and nine Ph.D. students, and mentored numerous postdoctoral scholars and visiting students from all over the world. He often interjected a good pun or joke to make his instruction informal. He always imparted his knowledge to graduate students without condescension and was willing to discuss virtually any subject, but his favorite was any aspect of biological control. He often stayed in touch with graduate students long after they completed their degrees, and even periodically contributed to their work. Over the years, he supported 20 of Professor Stouthamer's M.S. students from Wageningen University when they came to conduct field studies on parasitoid wasps in the Mojave Desert. Professor Luck's M.S. students included Susan Opp, David Goodward, Bai Baorung, Jeff Honda, and Shannon Kirshtner and his Ph.D. students were Devin Carroll, Hannah Nadel, Thomas Unruh, Dicky S. Yu, Richard Stouthamer, David Kazmer, Jeff Honda, Celso Hohmann, and Apostolis Kapranas. He authored 97 scientific journal articles and 17 book chapters from 1967 to 2012. Often, the illustrations in these papers were created by his wife, Nancy, who was a technical illustrator at UCR.

Bob and Nancy enjoyed living in northern California and never expected to remain in Riverside throughout his entire career. After Bob's retirement, they returned North, settling in Santa Rosa in the Sonoma Valley. Bob is survived by his wife Nancy, their two daughters, Stephanie and Andrea, his son-in-law Philippe and two grandchildren, Antoine and Sylvie.